All You Need to Know About Adnan Samman - EMERGEAST

All You Need to Know About Adnan Samman

Tell us about the moment you decided you wanted to be an artist... I never really decided it's time to become an artist. I think I've always had that drive to create things since I was born. But I remember that at a certain time in my life, back in 2011-2012, I was constantly experimenting with different imagery and techniques, and sharing the results online. Later on I realized that there was a positive response from people out there, and that was the spark that made me approach this more seriously and professionally than just a hobby.

Your imaginative collages take us back in time with an air of hope in the future. Tell us more about your inspirations/your message

I always get this from people who view my work: "nostalgic!", and that's very interesting. Sometimes it's not intentionally my purpose, but I believe that how I've been living the second and third decades of my life, moving from one place to another and leaving whole lives and memories behind, has affected my work mindset in a way. My collages tend to depict alternative scenes to the usually harsh, ugly reality of what's going on, and that is apparently translated as hope sometimes. It's always quite an experience for me to see how each piece can meaning a different thing to different individuals. That's been part of the fun! I would say the only message I like my work to send is that of curiosity and openness to the new.

How has the digital medium facilitated this message?

Working digital has opened many doors of possibilities for me and definitely allowed my mind to go as far as possible. You know, you can do anything you want on a computer these days, no matter what it is! Technical and financial limits can really stop an artist's dream vision sometimes. Luckily for those who work digitally, things are much easier. Of course there is a lot to learn about digital mediums and how to tame a machine to do what you want. That's a lot of learning to do, it's a science. But once learned, it's very worth it. 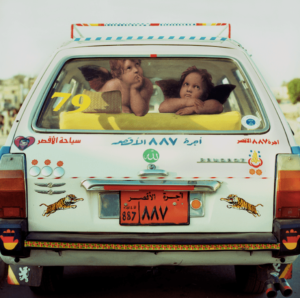 Do we expect Adnan Samman to dabble in other media?

I think that's very possible yeah. I've always wanted to try installation, sculpture and interactive art. I've done some audio-visual stuff in the past, and doing other different things outside of the computer is always on my mind.

How has your time living in Budapest influenced your art or your identity as an artist?

It's been a very interesting first year in Budapest indeed. I met different, more varied types of people here, who in return affected how I see and think of my surrounding. I would say I feel more isolated here than I did back in the Middle East for sure. That kind of isolation leaves different fingerprints on one's personality and it did on mine. Overall I benefited a lot from my time here in a positive way. For example getting paid and producing my work here is much easier than Jordan or Saudi Arabia (where I spent most of my life). I wasn't allowed to even have a bank account back there. Now I do. That doubled with access to PayPal has made workflow much better. Being in Budapest also allowed me to travel around, and I traveled to Italy twice! Got to see many of my bucket list artworks in person, and that was quite something for me as a creator.

What's next for Adnan?

I was recently collaborating with Institut du Monde Arabe on a project they're working on. This has been a dream-come-true for me as a big fan of the center, and I'm very proud of the results we've achieved so far. There are some surprises coming from that project in the near future. In the meantime, I'll keep producing more and more, hoping to reach more places. I'd like to network with people in South America and Australia and hopefully exhibit there, since those are the only continents my work hasn't traveled to yet!